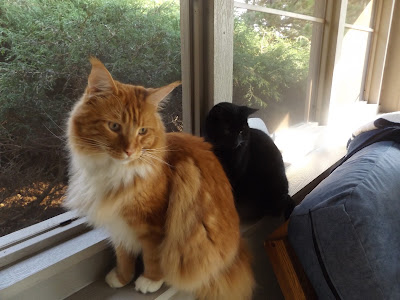 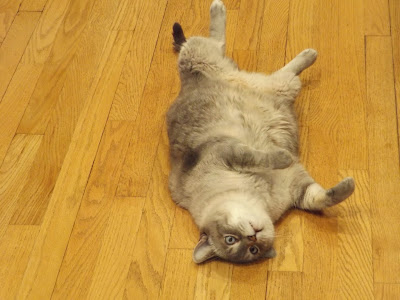 Tank in his best pose.

The ying and the yang, the good and the bad.

Oh, but first, lest you think I'm going around with a chainsaw in the woods for snicks, I need to set the record straight.
We only take down dead trees or hazard trees.
I'm not starting my own wooden needle factory or anything cuckoo like that....

There are other cuckoo things I spend my time doing.
ahem
Yesterday a very handsome Fezzik was dragged from his early morning slumber,
taken in a car ride for 1 and a half hours that had to seem an eternity to him
and asked to be both stunningly beautiful and
happy about it on a photo shoot.

I don't think Hollywood is in the cards.
Suffice to say I was thrilled when he was chosen by a major pet food company to be photographed.

I can't tell you anything more specific. We may or may not see his face on a product.  We have to just wait and see.

He is afterall, a cat.
A cat who, despite his amazingly good looks, is still a cat and would love to have been in his own home wrestling his cat
pals.

He seems no worse for the wear this morning.
Cats will be cats.  They don't perform on cue.
I was a nervous stage mom.  I have to say everyone on the set was kind and sweet to him.
Given the choice, Fezzik would prefer to be catching a gross little mouse in his own house.

Suffice to say significant progress was made on the never ending sock blanket.  There was more than enough DOWN time on the set.  I'd guess I put at least 3 inches on the blanket.
It is clear that blanket is impossibly slow to show progress.

How exciting! Cool to be asked to go no matter what they decide about cat stars!
I know about the endless sock blanket knitting....it does lose its steam but I will power on!

How exciting for you both! Crossing fingers. . .

Thanks for explaining you're only cutting dead trees.. I thought you were deforesting your forest.. LOLOL! Very exciting about Fez possibly becoming a feline fellini! I know you'll keep us in the loop. Good luck with your Cubs! ((hugs)), Teresa :-)

A model living right there in your home, amazing. Hope the Cubs do better in game 4. I am keeping my fingers crossed the win the whole thing!

Go Cubs! How exciting for you, er Fezzik, to be photographed. It will be fun to hear the outcome of the photo shoot. I can't imagine any cat we've had being happy to be in those circumstances either.
Blessings,
Betsy

Good to know that others think Fezzik is a handsome fellow. He already has an adoring fan club among your blog readers. Hope he makes it through another level in the selection process.

I was rooting so hard for your Cubbies last night. Hope tonight is they have some hot bats!

Oh, the stress! Kitty photo shoot-never fun AND the World Series. Did you get those Tums? Heck, you probabaly need prescription strength Pepcid.

Amy at love made my home said...

If Fezzik becomes a star then he will probably ask you to catch the mice for him and bring them to him! Hope he appears soon and you can share more!

You went from suburban girl to country girl in a hurry! You new life looks wonderful!
Even if Fezzik doesn't become a star, he has his fans here in blogland.

Fezzik can't be anything by photogenic!! If I see his sweet face in stores I will say, "I know that cat."

I did it! I confess. I watched the Cubs game and they lost. I will not watch again. Someone please wake me when it's over.

How exciting! I hope it all works out. He is definitely a star no matter what.

he is a celebrity on your blog :) i am working on my blanket slowly but surely stitch by blessed stitch...

Which blanket pattern are you using?