Here are the prizes for the Cookie Sheet Blanket Contest 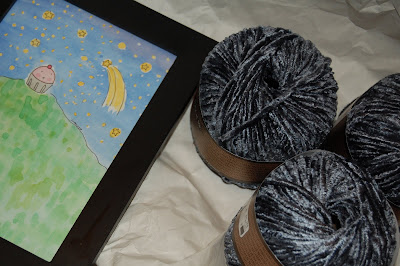 Thank you jessie of CAKESPY.COM who happened to be awake when I was into the wee hours one night last week. She generously donated an original Cakespy framed art to the Winner. It is so cute! Cupcake wishing on a shooting star. Whose kitchen is it going to????

I am also donating 3 soft soft soft skeins of Touch Me. It looks too dark in the image. It is really a lighter dark blue. No one will complain that a scarf from this yarn will itch them!

I have already received blankets from Darfark NJ, Metuchen NJ, Connecticut, British Colombia, Wyoming, and Glendale. Arizona.
One cuter than the next.

Some who sew have offered quilts. If you are a winner, I'll exchange the yarn in the prize for some fabrics.

Thanks to all. Deadline November 1. Prize winner announced that same day, once the mail has been delivered.

Hey missie. Someone is pulling your leg. There's no such place as Darfark NJ. There are tons of small towns in NJ, and some have weird names like say, Metuchen, but I am willing to wager there ain't no Darfark. How about sloppy penmanship? Or maybe you need new reading glasses? Could it be Newark? :-)

If someone really did send one from Darfark, I'll knit another blanket. Actually maybe I will anyway if I can find a minute or two.

I was so focused on Darfark, that I didn't notice the prize. Wow - is someone going to be lucky! I have heard so much about Touch Me, and have been dying to try it, but it is so expensive. Did you rob a bank or yarn store or something? Boy are you generous.

And so is jessie. Cute cute cute.

Elaine you crack me up. I splurged on the Touch Me because our weather has been so cold. I have been wearing my fall and winter jackets and vests. Each time I put one on I find a little bit of cash in the pockets!

You are all generous with your time and talents for the babies on our unit, so it is worth it to give a good prize. Im so grateful to Jessie of Cakespy.

Wow - you really are generous, but I notice you didn't say anything about Darfark!

This morning is our annual Making Strides cancer walk. My daughter signed us up and raised almost $2,000 right after I was diagnosed, just after I had started chemo - one of the lowest points in my life. It was so great to see all the women out there wearing SURVIVOR shirts. The next year we did it in Providence - it was parents' weekend and she had found the walk there. I've done it every year since - this is my sixth (five years with no recurrence!) but it is a rainy miserably cold day. It will be tough to be enthusiastic. Sigh - I hope this is not a sign. Put in some good words and vibes for me guys.

I have a new computer keyboard and I'm typing things like darfark all the time now. Isn't amazing how one change can screw things up so much. (I made five corrections to the line I just typed). Taking this keyboard back tomorrow!

Anyway, great prizes. I must get my blanket in the mail to you.

Darfark must be mine, which is Dafrack Drive Lake Hiawatha but maybe she was trying to give me anonymity!

Love love Cake Spy artwork!!! ITs adorable and I have felt Touch me Heavely yarn!

Even before I saw the prize, I finished a blanket. I'll send it in in the next few days. Another NJ knitter - but nothing as exotic as Darfark. I'm in Edison.

I've never seen or touch it, but now it seems wonderful (the yarn, not Darfark)