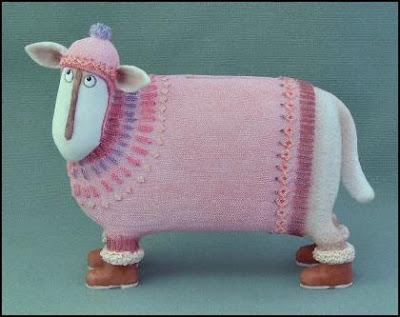 This is not an April Fools joke. Hooray. Hooray. I'll spare the details as you all have been so incredibly supportive. I can knit as of the weekend. When it hurts I must stop. I plan to drink champagne the first time while I knit, so the pain won't be felt even if it was there! JUST kidding.

My fun Carol, OT, says the thing Im not talking about anymore,
has a very high WHINING factor. She was just at a conference which discussed it.
So Im not whinin anymore. No country songs for me! No country songs about me!

Here is a sheep I found. I like his sweater very much.

I think I am over the angora bunny wish. I joined the ravelry group re:buns and they were an honest bunch.
The paragraph someone wrote about how much they poop just popped me right back to reality.
My Uncle John always said he only wanted a dog that had a head at both ends of it.
If the thought ever hits me again, go ahead and slap me pretend friends. That is what you are for!

I was on Rav last night and bumped into Grace in practically real time. I had this strange urge to ask her number, and call her up and talk to her. But it would ruin the whole pretend thing we got goin here.

I love you all my pretend friends. Thank you for being here for me since December when the thing that I wont mention anymore , all began.

I want the sheepie lololol

Yay for being able to knit again!

What project are you going to knit? Yeah knitting again woot woot.(((((Hugging You))))) Darcy

Woohoo! Go easy and have fun.

Yaay! That's a long time to wait, but I'm glad it's over now. It's probably like when the water is turned off and suddenly you are thirsty, just being told you can't knit makes you want to all the more. Maybe I'll go find some champagne and drink with you (pretendingly) lol

The sheep is SO cute!

So glad the thing we won't mention anymore is a thing of the past!! I know you must be glad to have your knitting mobility back.

Re:buns? That prompts all sorts of wild mental images.

I love the sheep, especially his hat. I think I knit one like it last year!

It was fun, I have still resisted buying the pattern but I know I will succumb eventually!!

I am so glad to hear that your arm is doing better! Oh... one tip: when it gets colder or when rain is in the air, keep your arm warm! It will save you a lot of troubles.

Welcome back to the woolly world! What are you going to knit first?

Woohoo! I will knit a round to celebrate your recovery!

Im sorry you are having troubles with JOJO Swirl scarf. I do know that Diane the lurker had some suggestions. I gave them to Grace in a rav mail and cannot find it now.
I know she said something about picking up the stitches and then casting on for the next circle. Or vice versa. Otherwise the circle would curl on her.
Does this make any sense to you at all. I do want to help you, so if this makes no sense, send me an email at harpnut@gmail. com and I will ask Diane your questions specifically. She is knitting away wihtout taking a class for swirl scarf.....