Be Careful what you wish for.... 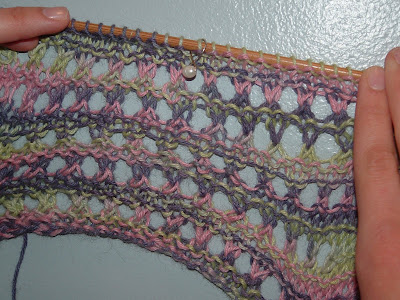 I don't want to say that the Skydive Scarf pattern was too easy. I wanted to start out very easy. But, I don't think I can stay interested in it long enough to make the scarf. So in an effort to be careful what I wish for I won't say I wish for a harder pattern!

It was a great introduction to the use of the markers. I realize I want a row counter that goes onto the needles.
I didn't realize you need the row counter to match the size of the needles. The store I went to yesterday was out of size 8's. I took this a s a sign. I take alot of things a signs......
Perhaps my interest in lace isn't a sign of anything at all,
OH! But what if it is a sign of EVERYTHING.
No wonder I need my naps!
I slept in so late this morning and thought it must be a sign of my needing more sleep. It wasn't.
I'd just forgotten we set the clocks ahead last night!

My father really wanted a singing canary recently. It took him months to convince my mom she wanted one too. So they got the male canary who had apparently just begun his singing. My sweet mom read that he might be depressed leaving the avaiary and not sing at all. We actually prayed to St. Francis that the little bird wouldn't be depressed, because my mother and I cannot bear a sad animal!
My father played a record of a singing canary to Sonny, the bird ,every morning.
The backround music was primarily music of the waltzing varieity.
My mother reported that Sonny had a voracious appetite and didn't seem a bit depressed.

Very soon thereafter Sonny began to sing.
When we would visit they would play the music and, indeed, Sonny would sing for us too.
Well
Sonny began to sing rather incessantly.
Soon my folks were beginning to wish that Sonny didn't want to sing so often.
They were contemplating finding him another home.

Then one recent evening my father was , oh so carefully , cleaning the cage.
He and my mom were meticulous about keeping the doors closed during this daily event.
My dad had some little double door do hickey worked out on the cage itself to prevent Sonny from escaping.

Well, when Sonny wasn't singing, he was apparently working escape techniques out in his tiny brain.
Somehow Sonny escaped and the big door was open
Sonny flew like a shot out of a gun, my father told us.
and right into the the kitchen porch window.

My mother found him on the floor.
Again she turned to St. Francis and prayed he'd be okay.
She wrapped him in a warm towel from the dryer and laid him in on the cage floor.

They were on their way to Mass, and they don't miss mass for much.
Certainly not for a bird death.

Low and behold, when they returned, Sonny was sitting up.
He didn't sing that night.
We started to call him Lazurus.
And Sonny was singing the very next day.

And my mother and father decided to send him back to the aviary.
And we think he's singing there still.

So becareful what you wish,
or um
pray to St Francis for

Branching Out is a great lace scarf to start with. Pretty simple yet enough to keep your attention without becoming bored. If you are on ravelry you can search it there. It is from knitty.com but not sure which issue. Good luck.

I love the story of Sonny! We had a parrot once when I was a teen. My Father got rid of him because he started telling family secrets to anyone who walked in the door.

I'm glad to hear that I'm not the only one who is bored by Sky Dive! I ripped out twelve inches of the shawl and am debating whether I want to bother starting over.

You never guess what I did today...
I finished the blanket!!!

Photos tomorrow, as it is already dark here!

LOL-Love the story of sonny! my grandmother had a canary when I was little. His name was Panchito and he sang quite well until he died of old age. Then, Grandma got a parrot- named Paquito-- he could speak in both Spanish and English!

Try feather and fan for a first shawl, it will hold your interest, you can do it as a scarf, stole triangle shawl, etc and more interesting then just what you are doing now, I am doing the same stitch now in a vest pattern and I know what you are saying!

I hope Sonny has found happiness. :-)

Lace is one of my least favorite types of knitting for several reasons. I've knit all my life, mostly my own sweater designs, and I really enjoy interesting color interactions and interesting engineering. The designers I admire most are Hanne Falkenberg and Norah Gaughan because of their use of interesting constructions. Lace really doesn't fit much with these sorts of interests, although I often admire lace shawls which I used to crochet and never wear. But the worst part of a complicated lace pattern is that I can't read while I'm doing it and therefore it makes it horribly boring for me. I can't even watch a foreign movie (with subtitles). How can I JUST knit?

I just finished knitting a sweater for a yarn company to use in their ads. It is largely lace. It's pretty but I really didn't much enjoy knitting it because I had to pay attention to what I was doing. So there are advantages to a repetitious pattern.

What a wonderful story!

I wonder if Sonny is entertaining the other birds with stories of his near-death experience? Had the same thing happen with a bird that flew into our family room window. No lace for me, I'm pretty sure...but I'll watch for a sign.

I love the Sonny story!

I loved the story to funny;)I loved knitting the Easy Flame Scarf terrific beginner pattern did it in Lace Malabrigo you can see it in my projects on ravelry knottyknitter40.The scarf is gorgeous knit up in lace weight yarn.I used size 4 addi turbo's the ones you use to knit lace loved it.Only use one skein of lace weight Malabrigo for the project recommend a solid color.Hugs Darcy

I had a cockatiel that sounds a bit like Sonny...I agree- becareful what you wish for.

I discovered lace knitting is not my forte! I much prefer a textured pattern with no graph to follow...apparently graphs are not my forte either!

Oh, my! What a great story about Sonny! Just amazing!

Your "Half Irish Knitter" limerick is hysterical, too! Glad to see Huck wearin' the green! Youhave got me checking out tea cozy patterns on Ravelry and elsewhere... I think there is one in my (not too distant) future! Thanks for all your great pics!

Poor Sonny...LOL at the story tough. Be very, very careful what you wish for.